Skip to main content
It looks like you're using Internet Explorer 11 or older. This website works best with modern browsers such as the latest versions of Chrome, Firefox, Safari, and Edge. If you continue with this browser, you may see unexpected results.

NoodleTools for Students: Work with Projects

How to use Noodletools A student's guide 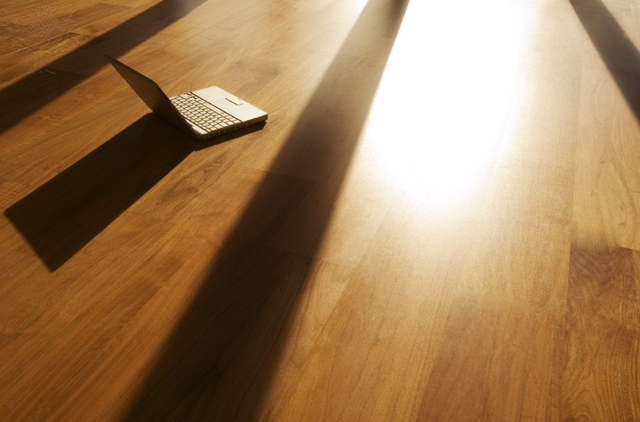 On this page you can learn:

How to Create a New Project

On the Create a New Project screen, provide information about the project: 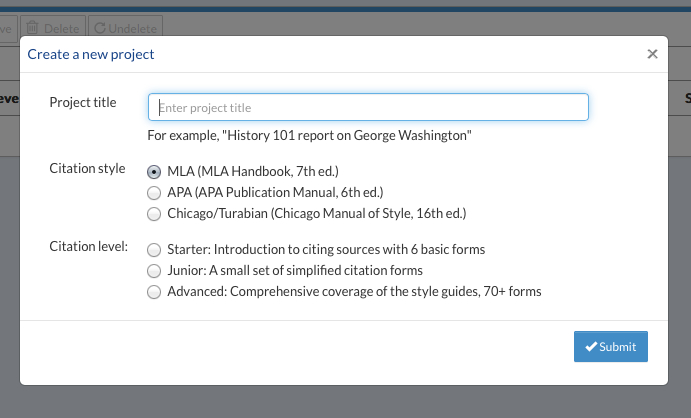 1. Enter a Project title. Enter a brief description that will help you remember the contents or purpose of this project when you see it later among other projects in your account.

3. Select a Citation level. NoodleTools allows you to select between three levels: Starter, Junior and Advanced. These are intended to roughly correlate with a student’s grade level:

4. Click Submit to create your new project. if you change your mind, click “X” in the upper right corner to return to your Projects screen.

How to Copy a Project

You can create a duplicate copy of an entire project (source list, notecards and outline) in your own folder, or transfer a copy to another NoodleTools user. For instructions on how to copy individual citations, see “How to copy a source reference to another project.”

To copy a project, on the Projects screen, next to your project select the Options menu and Copy.

To copy more than one project at a time, mark the checkboxes next to the projects you wish to copy and click Copy at the top of the Projects screen.

On the popup screen, Copy projects, select my own personal folder if you want to duplicate the project in the same folder, or select another user’s folder and enter a personal ID to transfer a copy of the project to another user.

How to Rename Projects

To rename a project, on the Projects screen, next to your project select the Options menu and Rename. You will be prompted to enter a new description for the project. Each project in your folder should have a unique name.

How to Email a Project

You can email a RTF version of your source list and an HTML version of your notecards and/or outline to yourself or someone else. The recipient will be able to open the source list in a word processing program. The HTML versions of the notecards and outline can be opened in any Web browser. The recipient is not able to log in to your personal folder or change your master project in any way – only a copy of your work is sent. While there is also no way for the recipient to import the RTF version of your source list into their own personal folder, you can share an editable copy of your project with another NoodleTools user. See “How to copy a project" above.

4. If your source list contains notecards or an outline, check the box to Include outline or / and Include notecards.

NOTE: The Word document paper is not included in the email. If you want to email the paper to someone, log in to your Word online and email it from there.

How to Merge a Project

Two or more projects in your account can be merged into a single project. As a safeguard, the original projects you select to merge will also remain in your account unchanged. The new merged project will be added to your account, identified by a new description that you provide.

NOTE: Merging projects with different levels will result in a project set to the highest level (e.g., merging a Starter and Junior project will yield a Junior-level project).

1. On the Projects screen, check the boxes next to the projects that you want to merge. NOTE: All projects must contain source lists of the same style.

3. Enter a new Project title for the merged project.

How to Delete or Recover a Deleted Project

One or more projects can be deleted by checking the boxes to the left of the projects on the Projects screen, and click Delete above the projects. The selected projects will no longer appear in your account.

How to Archive a Project

While it may make sense to delete some projects you no longer need, you may also decide to keep certain projects for future reference or as part of your academic portfolio. As your projects pile up, it may become more difficult to find current work and can even slow down the Projects screen loading time. To solve this, you should archive old projects.

Projects can be archived via the Archive on the Projects screen.

Archived projects are highlighted in pink. Archiving a project has no effect on its Shared or Collaborating status. A teacher that you have shared the project with will still be able to view and comment on the project. Team members of a collaborative project that you archived will continue to see and have full access to edit the project.

If you want to continue working on an archived project, you will need to move it back among your current projects by checking the box next to the project’s title and click Unarchive above the project list.

The librarian is always happy to help you!

By Phone - during library hours